I happened by chance to come across this all-too-small exhibition of African textiles at the Bristol City Museum. It encompassed only two relatively small rooms, but what a lot they managed to pack in!

The first room was a display of various different fabrics and clothing. The items came from Nigeria, Ghana, Kenya, South Africa, Sudan, and Mali to name a few of the countries and spanned the late 1800’s to the present day. There was audio commentary, insights into the textile’s origin and first-person stories to provide context.

The second room showed a video of a tailor making up a dress. He had an old electric sewing machine, probably as old as mine. He was so quick and sure with his sewing, it was amazing to watch. I really marvelled that he could apply yards and yards of trim using just one pin!

Here are the pictures I’ve taken of the exhibition and some notes about some of the fabrics. I’m hoping I’ve got all the details down right as I know very little about African fabrics. This exhibition really opened my eyes to the great variety of textiles that come from the continent.

Boubou, or kaftan, made in Sierra Leone (possibly Mandinka people) in the 1960s-70s (on the left)

The kaftan is ancient Mesopotamian in origin. Islamic influence brought it to Africa and from the late 1950s European fashion adopted the garment, where it is commonly seen as beachwear. This kaftan has been dyed using tie-dying or Gara as it is known locally.

Bogolanfini, or “mudcloth”, made in Mali (Bamana people) in the 1980s

Mud cloth is cotton cloth and dyed using fermented mud. The high iron content in the mud produces a black pigment when applied to the cotton textiles. The cloth was originally worn as wraps or made into shirts.

One familiar textile to me are the West African “wax” print cloths. In the early 1800s the Dutch tried to sell their mass-produced version of wax-resist cloth, batik, in Indonesia. But the production process gave a “cracked” look to the finished print and the textiles were rejected by the Indonesians, but became popular in West Africa when Dutch and Scottish trading vessels began introducing the fabrics in those ports. The Dutch company Vlisco still makes this type of fabric, and it is also produced in Ghana. 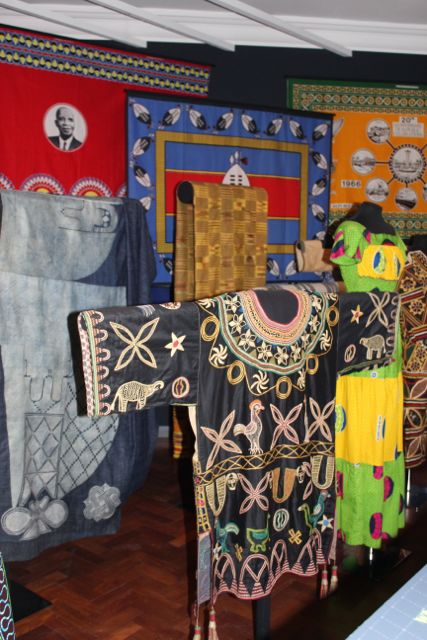 Animals are often used as symbols in African art to associate the owner with the qualities of a particular animal.  The elephant represents qualities associated with leadership, strength and wisdom. The u-shaped designs are iron bells on the tunic (above) and are a royal symbol. This type of tunic until recently would have been worn only by the elite of North West Cameroon society. 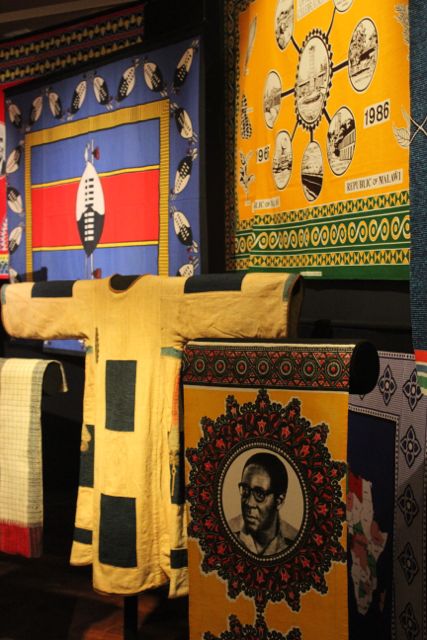 Left: Jibbah, or tunic, made in Sudan in the late 1800s Right: Fabric showing Robert Mugabe, Zimbabwe Behind: Twentieth anniversary of forming of Republic of Malawi

There were a few textiles that had been designed to commemorate particular events, such as the 20th anniversary of the forming of the Republic of Malawi or for politics, such as the fabric showing Robert Mugabe above.

Kente cloth from Ghana was originally woven in traded silk. Between 16 and 24 strips would be sewn together to create the cloths worn only by the king and his family. Today mass-produced and high-end versions of Kente are worn throughout Ghana. The colours in the cloth have symbolic meanings; blue means peacefulness, yellow royalty or wealth.

The masquerade costume from Nigeria represents a young woman who has died. The performer, would wear the full costume which includes a mask, and attempt to help the deceased pass onto the next life.

Adinkra cloth was originally worn only at funerals, but it is now worn commonly seen at other important occasions in Ghana. The word “adinkra” refers to the hand-stamped symbols on the cloth. Adinkra means farewell to the dead. On the cloth above the heart signifies love, patience and tolerance, the circles which look like “eyes” mean accepting the supremacy of God and the leaf-like symbol represents keeping confidences.

I noticed on the website once I’d seen the exhibition that they also had put together African textile handling boxes. I think these were primarily designed for children and somehow I hadn’t seen them. There is no better way to explore fabric that to feel it in my opnion, so I was disappointed that I’d missed this.

The exhibition runs until May next year and there is a Fabric Africa fashion show on 17th October.