I just thought I’d put out a reminder about Sewing The Seventies. It’s now March and I hope your seventies style sewing is coming along. For more information on the challenge, please take a look here.

Have you all been watching The Great British Sewing Bee? I couldn’t believe that this week’s episode was all about the seventies, talk about good timing! Anyway, here’s a review of this episode, complete with seventies pattern inspiration. It looks like The Foldline got there first with a great review which gives modern patterns picks for the garments in this episode, but I thought I’d suggest some vintage patterns picks too.

First of all, the pattern challenge see the sewers grapple with the construction of a pair of bell-bottom flares. These are classic jeans with all the usual features; a fly front, waistband and back yoke and required the sewers to sew flat felled seams. I was surprised anyone managed to finish this task in the given time, it takes me an age to make a pair of jeans. Somehow Jen produced an absolutely impeccable pair of flares.

There are a few modern jeans patterns available. The ever-popular Ginger Jeans have a flared jeans expansion pack and there’s also the Birkin Flares from Baste and Gather, which are inspired by 1970s fashion icon Jane Birkin.

I’ve found it quite hard in the past to find a seventies jeans pattern. I suppose not so many sewers make jeans and this is reflected in the number of vintage jeans patterns available. A made some button-fly flares using Butterick 3065, a couple of years ago and they have been firm favourites since.

The transformation challenge required the sewers to make a punk outfit in just one hour. A slightly anarchic (this is the Sewing Bee, after all) hour followed, in which Patrick pogo-ed around the sewing room and Esme was almost trampled in the process. The winner was Riccardo with a wild creation featuring a zip around the crotch!

In the made-to-measure challenge the sewers take on the the maxi dress. They have five and a half hours to create a dress that fits their model, they could either choose a modern pattern with a seventies vibe or a vintage pattern. Three of the sewers used vintage patterns.

Janet chose Vogue 2618, which was a dress pattern that she’d made previously in 1973 for a wedding. 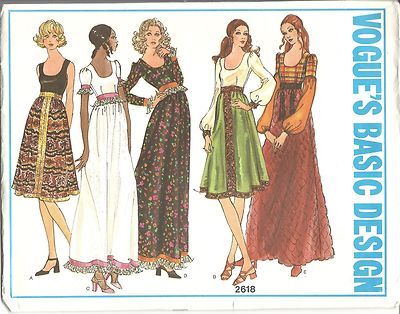 Jen chose this dress designed by Lee Bender for Woman magazine. I managed to find this photo of it on the web, but I suspect this may be quite a difficult pattern to find.

This dress below has a similar bodice and skirt design.

Mercedes’s dress pattern, Vogue 2810, has an interesting shoulder yoke; the shoulders and sleeves are cut as one pattern piece.

Two of the sewers chose modern patterns with seventies features. Alexei’s Burda 6892 dress was lined and the construction was mostly a question of the many darts.

Juliet chose McCall’s M7745, which is a wrap dress with flounces.

I peered for ages, replaying the episode on iplayer and didn’t get a glimpse of the pattern company or pattern number for Leah’s maxi dress. However, I think this vintage number is a good fit, it features a v-neck and bishop sleeves 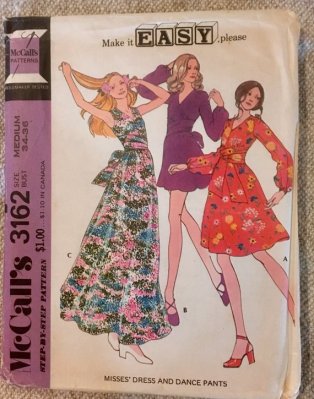 The final two contestants, Riccardo and Ben bravely chose to use self-drafted patterns. Riccardo drafted a three-tiered maxi dress, similar to the one below:

Ben had designed his own mushroom screen-print, which was beautiful. His design featured a distinctive pleated waistband. I couldn’t find anything particularly similar to his design, but this one below shares the bodice and skirt shape. 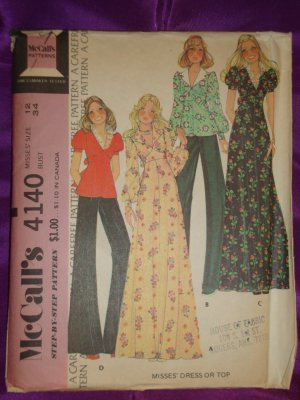 5 thoughts on “Sewing The Seventies: The Great British Sewing Bee -The Seventies Episode”