I have my doubts around sweatpants, joggers, tracksuit bottoms or whatever people call this item of clothing. Essentially I fear wearing something that looks awful; a garment seen on builders that reveal too much cleavage or a teenager loitering on a street corner (no offence intended to builders or teenagers – I know some very nice examples of both!) But I hold a degree of prejudice for this garment and I needed to find a pattern that would eliminate my fears. Is it possible to make “elegant” sweatpants? Or at least ones that look like you decided you’d made an intention to wear, rather than just picked them up off the floor for the umpteenth day in a row. (See, the negativity towards sweatpants just keeps on running off my fingertips!)

After a search on the internet for suitable patterns, I decided to go with the Ruri sweatpants. Just look at the photo of the model (below); they are sweatpants in disguise surely? Admittedly, the high-heeled boots do make the model’s ensemble rather more sophisticated than some trainers would. However, I have hopes that these will fit the bill. They are slim fitting, have some roomy pockets and I love the snap closure feature on the hem. Furthermore, I can actually see myself making additional iterations of this pattern, perhaps in a woven fabric or in velvet, which would be a plus. I hate to buy a pattern that I think I’ll only use once. 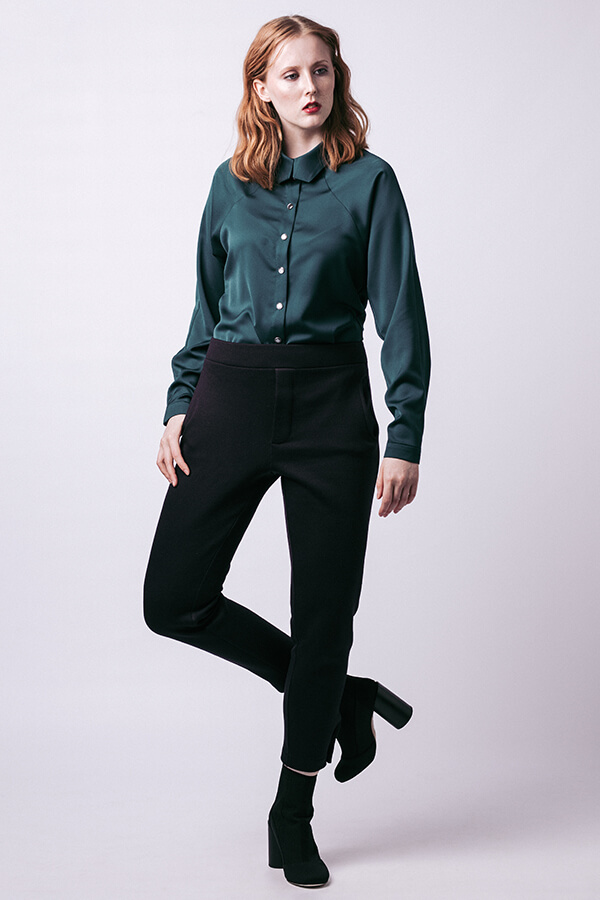 I didn’t start sewing these until August. The reason being that I took a trip to London on 30th July and I wanted to buy the fabric there. I’m quite limited locally with fabric shops. There are a few, but I knew that cotton sweatshirting was not going to be stocked in any of them or at least with lots of choice. Anyway, despite a long meeting in central London, which took up way more time that I imagined it would, I still managed to head up to Islington and enter the tempting emporium that is Ray Stitch. Unlike my local shops, which are small and once you’ve eliminated the non-dressmaking fabrics, like the felt or upholstery-thickness bolts, there is a very limited selection, I was somewhat overwhelmed by the goodies. Fortunately, I hadn’t gone in with a carte blanche purchase attitude and I stuck to my guns and bought my sweatshirting. (I also bought some jersey fabric, but again that was an intentional purchase. I hope to use that very soon.)

My sweatshirting is in navy blue, in keeping with my grey/navy blue basics theme for my #SummerOfBasics outfit. I also purchased some silver-coloured snaps. I found some 4.5cm width elastic in my stash and I was ready to go.

The Named Clothing instructions for the Ruri are very good, with clear line-drawings; such a joy after the wasteland of Burda instructions. I quickly put together the pockets and tacked together the crotch and trousers seams. At this point I tried them on and found that they were rather roomy at the front, so I re-cut the fronts of trousers making them narrower and so the crotch seam was less curved too. Once I was happy I sewed everything up and constructed the waistband. 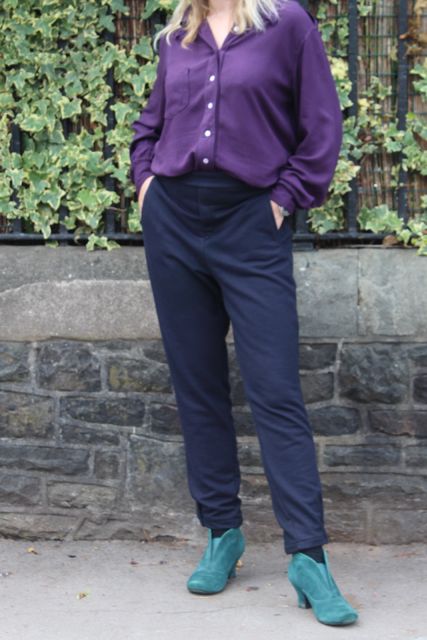 The waistband caused me quite a few problems and I had a couple of attempts making it smaller each time. The fabric pieces must have been quite a bit smaller than the suggested pattern measurements for my waist size. I had tried the waistband on before sewing the top-stitching. So, I think that when I sewed in the elastic, there was some stretching out, which caused the elasticated back portion of the waistband to lengthen. Never mind, I got there in the end. I notice that Sie macht had had the same problem when she sewed the waistband. And then, I had an enormous drama sewing the waistband to the trousers. It resembled an enormous tug of war with the overlocker. Trying to hold the elastic unstretched while getting umpteen layers of fabric through the machine. I broke two needles in the process and had to visit the haberdashery to replace them! I would say that when I make this pattern again I will make sure that the seam allowance on the upper waistband is wider perhaps 1.5 – 2.0 cm so that I have little chance of the elastic creeping into my seam. It might prevent the needle breakage.

Then, there were the snaps. I was so worried about the holes that I needed to make in the fabric to insert the snappers, I even sewed around the holes to strengthen them. I was also anxious that I was going to insert the snaps wrongly, but it the end I managed. But I suppose they gave me as many jitters as buttonholes do….I think it must be the “putting holes in fabric” that worries me so much.

I decided to model the sweatpants initially in a similar fashion to the Named model. I think that they actually look smart, which is unbelievable. I’m not entirely sure I would naturally team this shirt and boots with these sweatpants, so it was good to see this combination.